The practitioner performance report provides you with helpful metrics to see how your practitioners are doing. Learn how it works!

Written by Emily
Updated over a week ago

The practitioner performance report provides information that will help you track how your practitioners are doing—it provides data points such as average revenue, number of "Did not arrives", and rebook rates, among more! 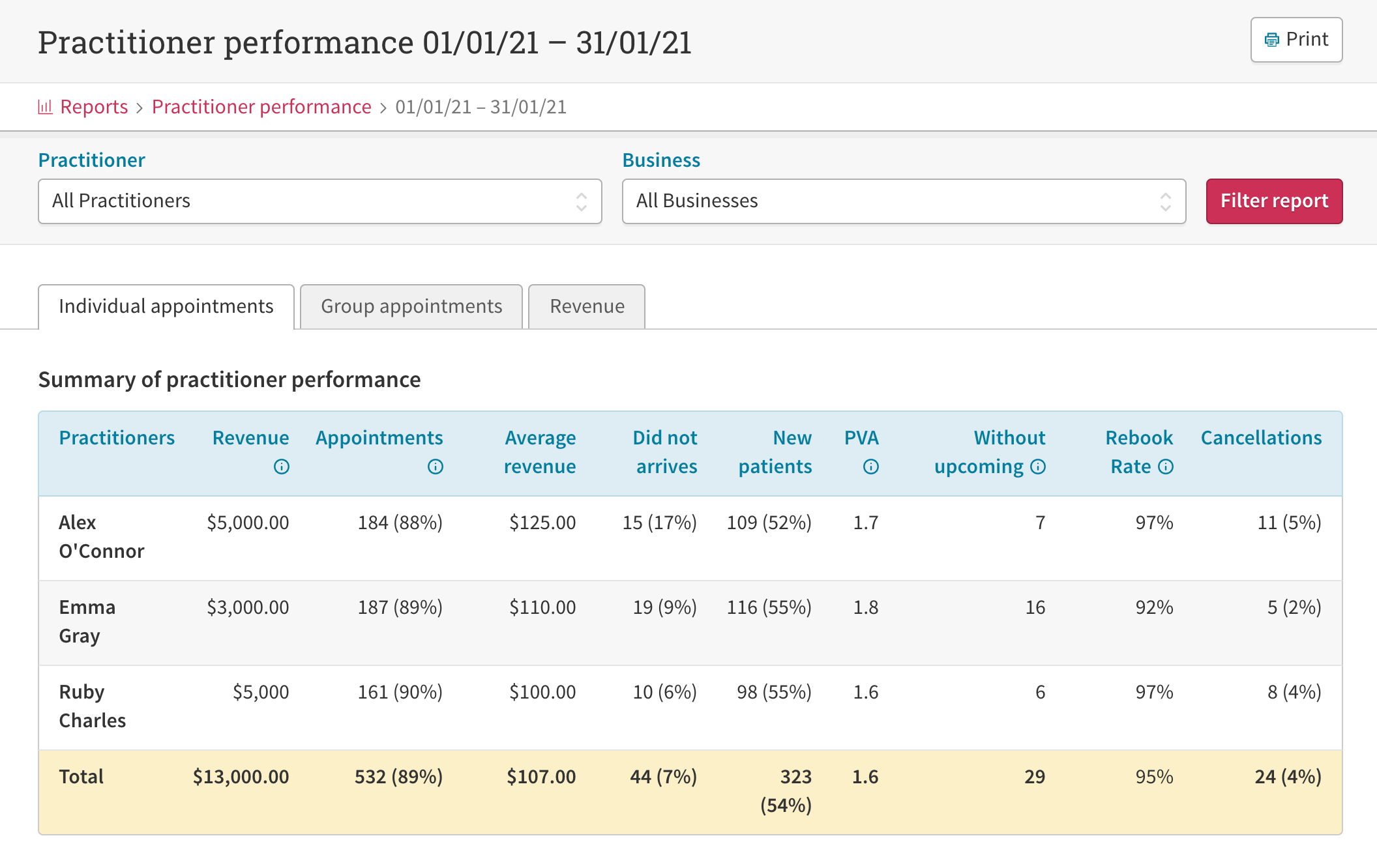 You'll have a main summary that shows you all data for all practitioners across the board, but you can also drill further into it by looking at individual practitioner performance graphs further down the page.

The performance report will default to the individual appointments view, but you can toggle between each tab to see the corresponding data.

Below, we'll walk you through how things are broken down within each of these tabs, and what the information means. Use the links below to skip ahead to each section if you'd like:

The different types of data for individual appointments are each defined (and calculated) in different ways, and it can sometimes be hard to understand what you're seeing. Below, we'll outline what each column means—to get started, here's a very quick summary (note that the numbers you see are always going to be based on the time frame you run the report for):

☝️Note: the information on the performance report will be based on the dates you run the report for—and will also be dependent on how you handle certain things, like properly linking invoices to appointments, marking appointments as "attended" or not, and more.

Read on for a more in-depth breakdown of what each component of the individual appointment tab of the practitioner performance report means.

The number you see here will be the total revenue from invoices (both paid and outstanding) that are linked to appointments. This means that in order for the revenue to count, the invoice needs to be marked as "paid" or "open" on the actual appointment, like this: 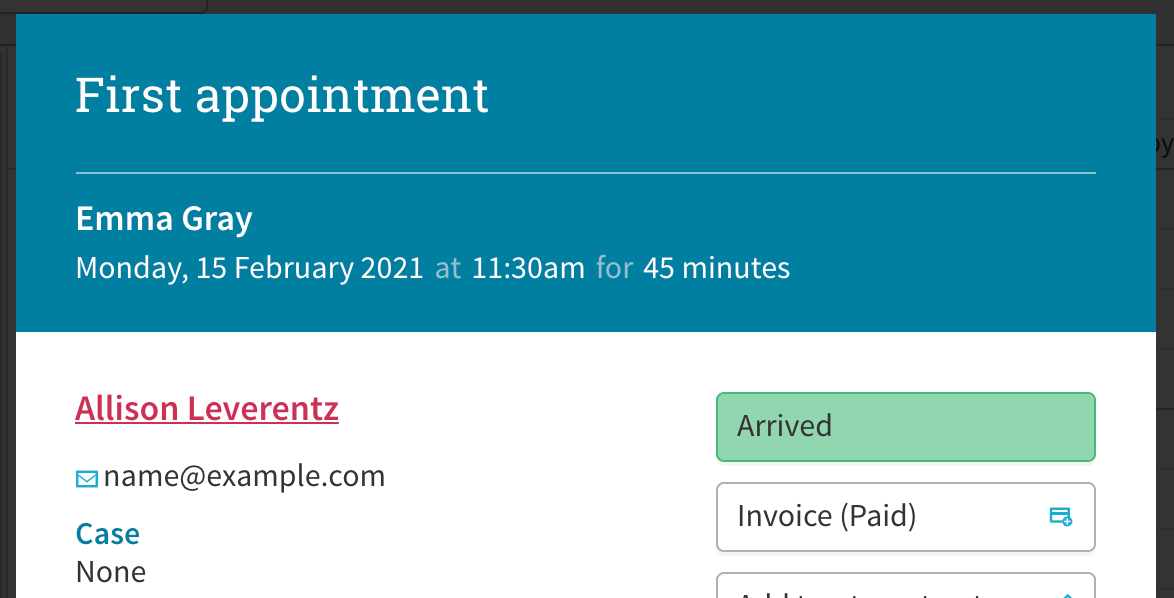 And were you to look at the actual invoice, it would have an "appointment date" on showing up at the top, like this:

If the invoice isn't "linked" to the appointment like this, revenue will not count towards what shows up on the performance report. It's imperative that all invoices be correctly linked to the appointment in order to be included in the total revenue, regardless of whether or not they are paid or still outstanding.

This number comes from the total number of appointments that were considered to be "attended" during the report's time frame. "Attended" is counted by either marking the appointment as "arrived", as indicated below:

Or simply leaving it blank (i.e. not marking it as "arrived"). We do recommend marking appointments as "arrived", though, as this will overall make for more accurate reporting in other places.

This is—you guessed it—the average revenue earned for each appointment. It looks at the invoices associated with all attended appointments included in the report and averages them out, so you can get an idea of how much this practitioner is earning per appointment.

These are appointments that are explicitly marked as "did not arrive", like this:

This number is based on the total number of patients who have had their first-ever appointment during the report's time frame. This means that even if someone was added to Cliniko two months ago, but did not have their first appointment until now (and the report you're running is for this week), they will be considered a "new patient". (Note that this is the opposite as what you would see in the new patients marketing report, which counts patients who were added to Cliniko during the report's timeframe—that report doesn't care about when their first appointment is.)

This is the average number of times that a single patient visits the practitioner after their first visit. It’s calculated by the total number of “valid attendances” (meaning, appointments that are not cancelled or marked as DNA) divided by the number of new patients seen during the report’s time frame. A higher number means more repeating visits (basically, less “churn”) for the practitioner.

Let’s say that a practitioner has had 50 appointments booked during the month of January. 10 of those were cancelled or DNA, so their total number of “valid” appointments is 40.

Out of those 40 appointments, 10 were totally new patients—it was their very first time at this clinic, with this practitioner. So the practitioner’s PVA would be 40 divided by 10, for a total of 4. The PVA, in this case, is 4—meaning that a patient’s average number of visits is 4.

☝️Note: if your account's terminology is set to "client", you'll see this as CVA (Client Visit Average) in this report.

The number you see here is based on the total number of patients who have an appointment during this report's time frame, but aren't booked for anything in the future. This could be due to the fact that they don't necessarily need to book another appointment because they're feeling better, or they've forgotten to book again, or something else. In either case, the number in this column simply indicates how many patients included in this report don't have anything on the books for the future.

For example, let’s say you have 10 patients seen in that period with 2 bookings each (so, 20 total appointments) in the report’s time period, and five of them have no other appointments booked after the reporting period’s end. That gives you a 75% rebook rate.

This is the total number of cancelled appointments that were due to occur during this report's time period. You will have to mark the appointment as cancelled in order to ensure it counts towards this number; simply archiving it won't achieve proper "cancellation" status. We always recommend using the "cancel" feature, anyways, as this will ensure that the appointment shows up in the missed appointments report.

This is defined as the number of attendees (patients) who showed up for those appointments. It functions in the same way the appointments column works in the individual appointments tab.

In this case, the practitioner at the top of the list had 21 appointments that were attended by patients, and they saw patients for a total of 15.60 hours. We can't know, from this number, if any appointments were cancelled or marked as DNA—we'd need to look at the details in the other tabs for that.

For a more in-depth look at service hours, head over here!

If you have any questions about how the practitioner peformance works, please do let us know! Our support team can be reached via the "chat" icon in the lower-right corner of your screen.

You can also learn more about other reporting functions within Cliniko here.