Learn how to use placeholders in appointment reminders, confirmation emails, and letters.

Written by Emily
Updated over a week ago

When Cliniko sends automated appointment reminders and confirmation emails, you'll want them to have unique information about each appointment! The same holds true for letters—although letters are based from unique letter templates, they'll need to be customised for each patient! Doing these customisations one at a time, though, and editing each reminder or each confirmation email before it goes out would be insanely time consuming—and not really worth the effort!

Placeholders "pull" information into specific fields. They show up in various templates in Cliniko as text in brackets. For example, a confirmation email template might look something like this: 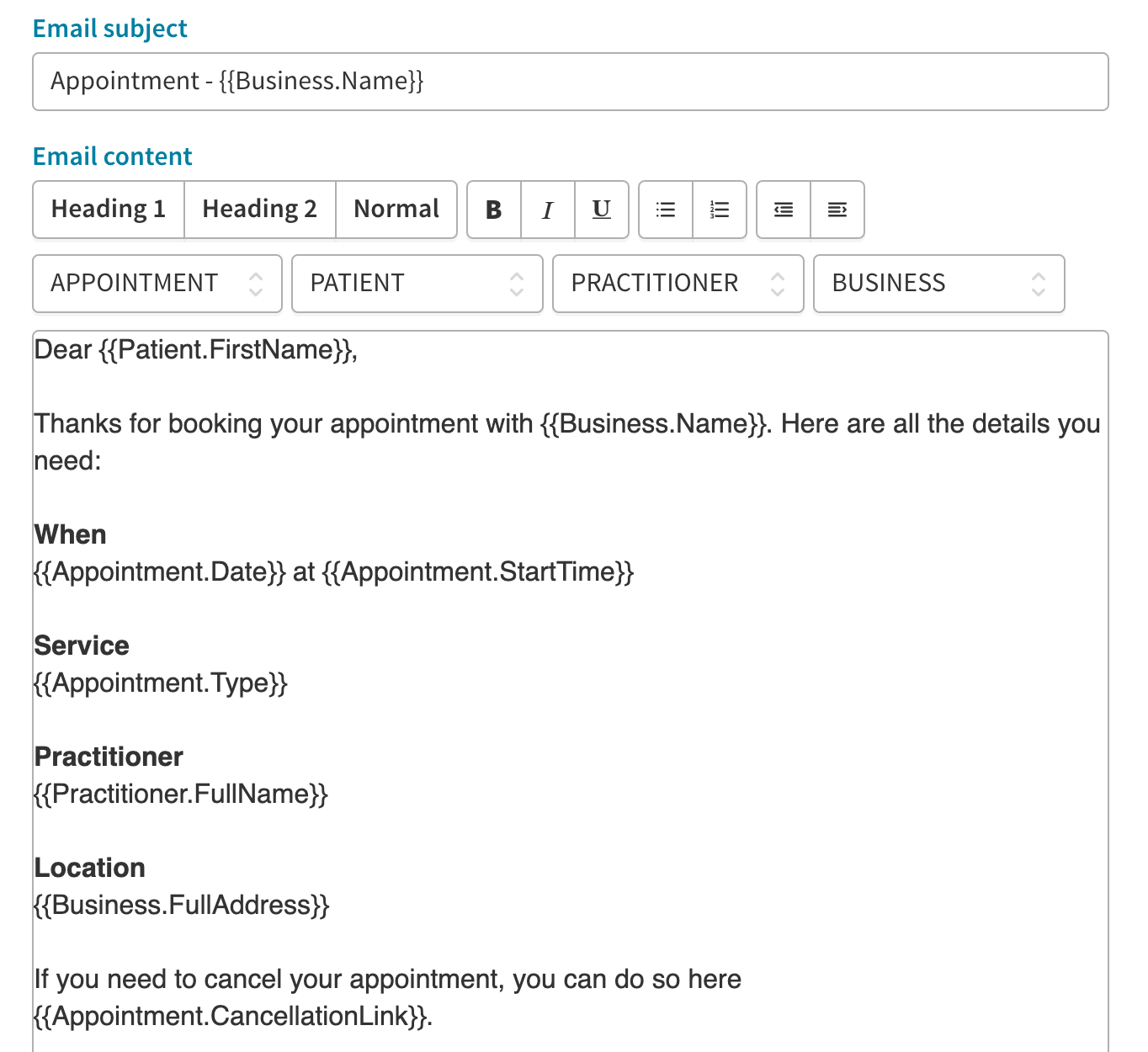 You'll see that things like {{Patient.FirstName}} and {Appointment.Date} are in brackets. This looks a bit funny, but don't worry—your patients won't see these! We'll explain below.

How do placeholders work?

As mentioned, placeholders "pull" information into an email, SMS reminder, or letter. Cliniko is pretty smart, and it knows that what's in brackets (such as {Patient.FirstName}) should be replaced with actual information! So, while your template will display the placeholders, the actual message that the patient sees will include all the details that make sense to them (and you!): 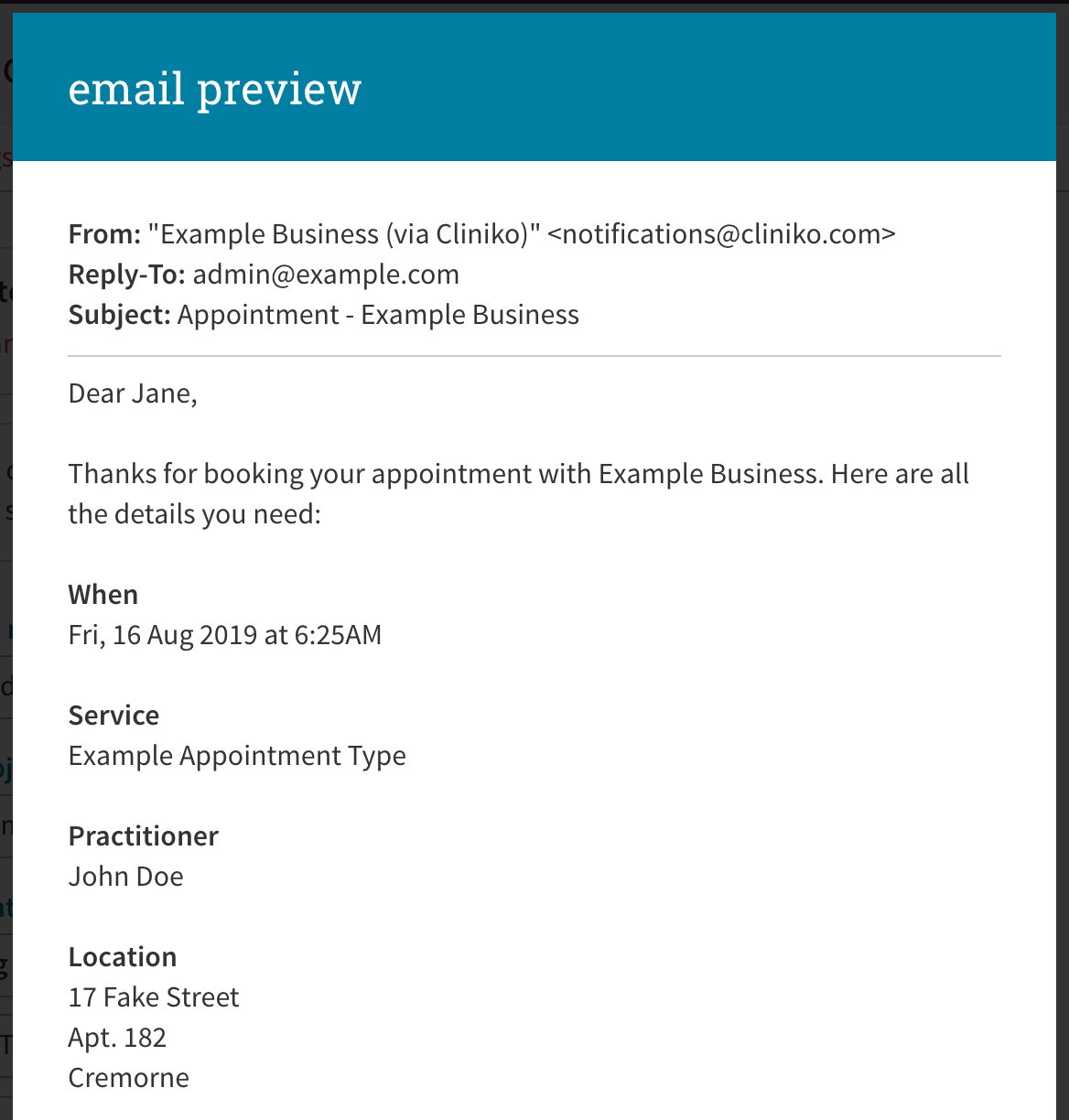 Where are placeholders used?

Broken placeholders and how to fix them

Most of the time, placeholders will be a-okay and you won't need to do anything to make sure they work. They just do!

However, if you're noticing that your outgoing messages have placeholders and not the actual text, it's likely that the placeholder is formatted incorrectly.

If there are spelling, spacing, or punctuation errors in your placeholders, they won't pull in the appropriate information and will appear as, well, placeholders. Take a look at the examples below and see if you can spot the errors. 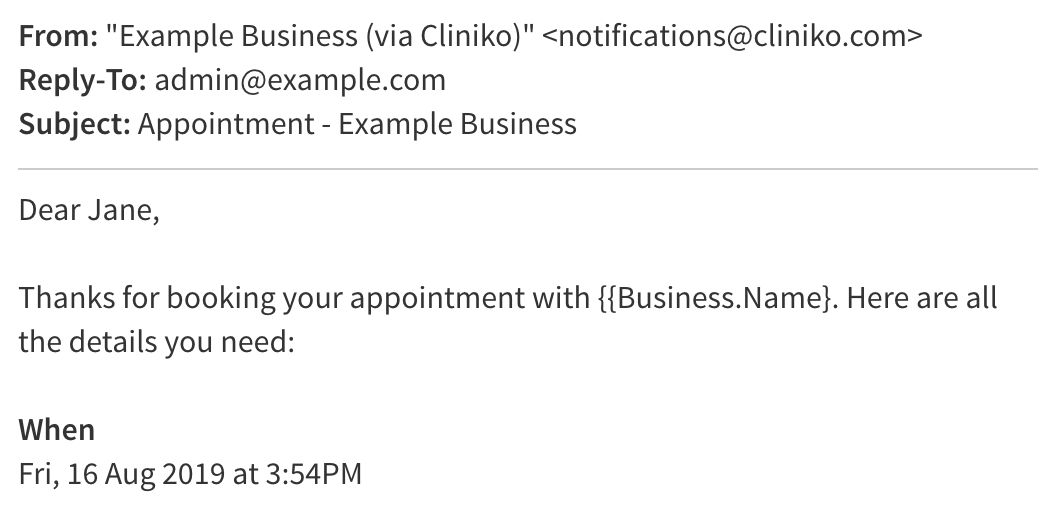 Can you tell what's wrong with the placeholders in those examples? Let's check them out again!

The {Patient.FirstName }} placeholder has a space after name and }} . Because of this space, the patient's name won't be "pulled" into the reminder, and only the placeholder will be displayed.

To fix this, simply remove that space, save, and you'll be set!

The {Business.Name} placeholder only has one bracket on the end (}). Two brackets on either side of the text are always required in order for the placeholders to work correctly.

To fix this, add that missing bracket, save, and you're done! 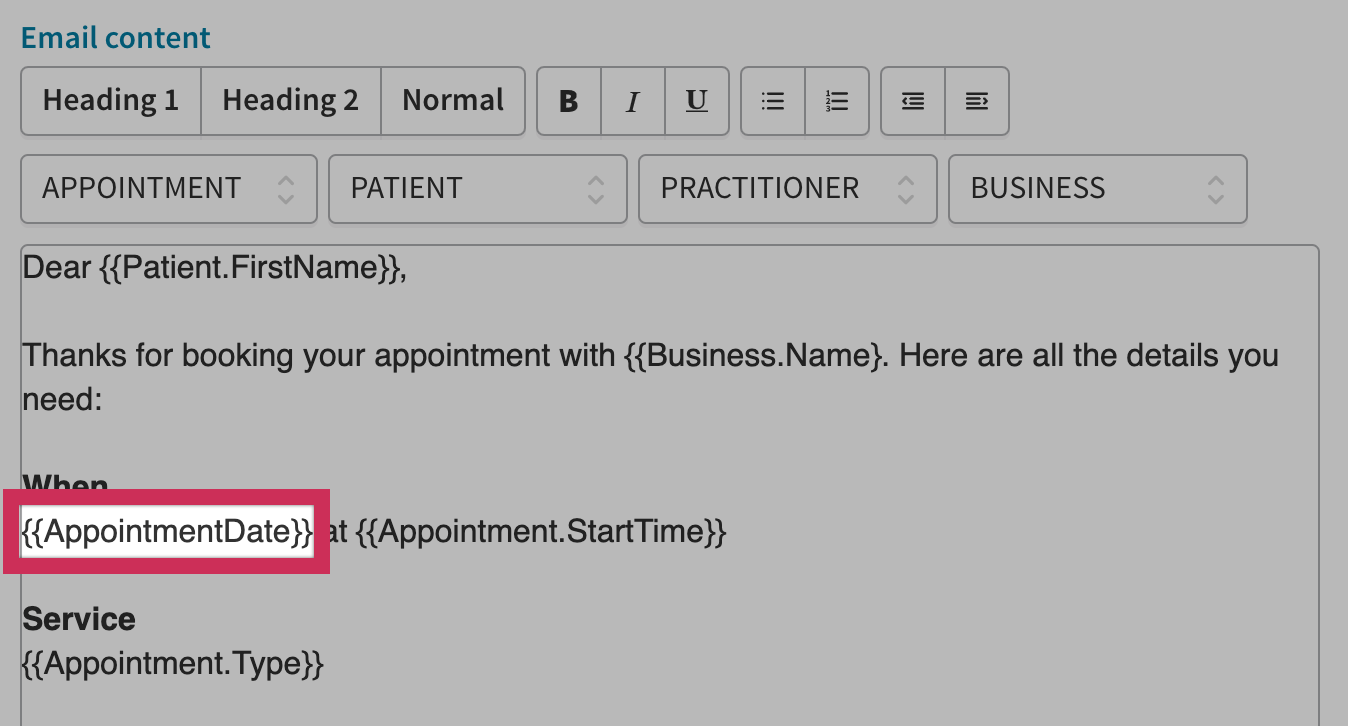 A period is missing in between Appointment and Date—there always needs to be a period in between the placeholder "type" (appointment, patient, practitioner, etc.) and the additional information.

To fix this, add that period in, and save!

Overall, placeholders are a really powerful little feature of Cliniko that should help to reduce your workload of manually entering certain types of information over and over again, when it comes to communicating with your patients!